There have been a couple of changes in the upcoming tour:

– Firstly, there is a new show that has been added; on the 29th February we will play at Rock Palace in Madrid!

– Secondly, there has been a change regarding the show the 9th March, which has been moved from Bejar to Liérganes in Los Picos!

The poster below contains all the show dates for this tour and can be seen in a large version by clicking on it. Only a few weeks to go now so see you soon! Until then you can check out these great Spanish reviews from The Best Music, Metal Symphony (who actually gave us a full 10/10 score) and from Cometa Rock (who have also cited our album as the best of the whole 2011!). 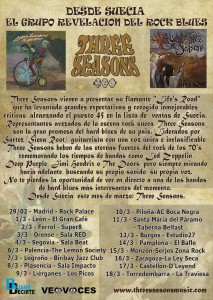